skip to main | skip to sidebar

Though my readership criss crosses the globe most of you have some sort of day of remembrance for veterans. So that's what this post is about but of course with a lessons for my sister twist. Also I will be focusing in on WWII simply because that is the biggest area of my history geekiness.
I live in a pretty amazing country. We have a country wide healthcare system, anyone can love whoever they want and get married too. We used to have an amazing morning radio show. (PS. CBC I hate you for the little "revamp" you inflicted on me). I can enjoy all of this for a few reasons and most of them have to do with war.
I can credit half of my existence to three men. Hitler, Stalin and Winston Churchill. See if Hitler and Stalin had never made that temporary alliance and Hitler had never broken it and then Hitler never of invaded the USSR then Great Britain would of never sent forces there to help with DP camps after the war and my grandparents would of never met.
That would of sucked. 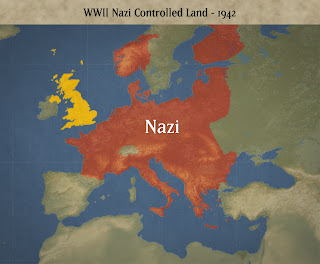 That is a map of Nazi controlled Europe. When I look at that and I see how much we had to lose it terrifies me.People died so we could have a chance at getting the world right again.
We've been in a lot of wars since but few have come close to putting Canada in so much danger. I think thats the biggest testament to humankind. That we will go and try to fight for something we believe in just because it's right.
Peacekeeping, it doesn't often go along with guns or tanks and I'm no advocate of violence. But I am an advocate of respect.
So how is this a lesson to my sister? I'm not sure and maybe I'm just being preachy but I think that knowing where you came from and why your life is how it is, is well important. We lament and celebrate and learn from the past.

Katie
Caitlin Kennific was raised in the "poorest" area of one of the wealthiest cities in north america where she was fed a steady diet of fact and fiction the lines of where one began and the other ended slightly blurred She loves run on sentances and has always wondered why author descriptions are written as if post mortem this does not stop her from doing the same.